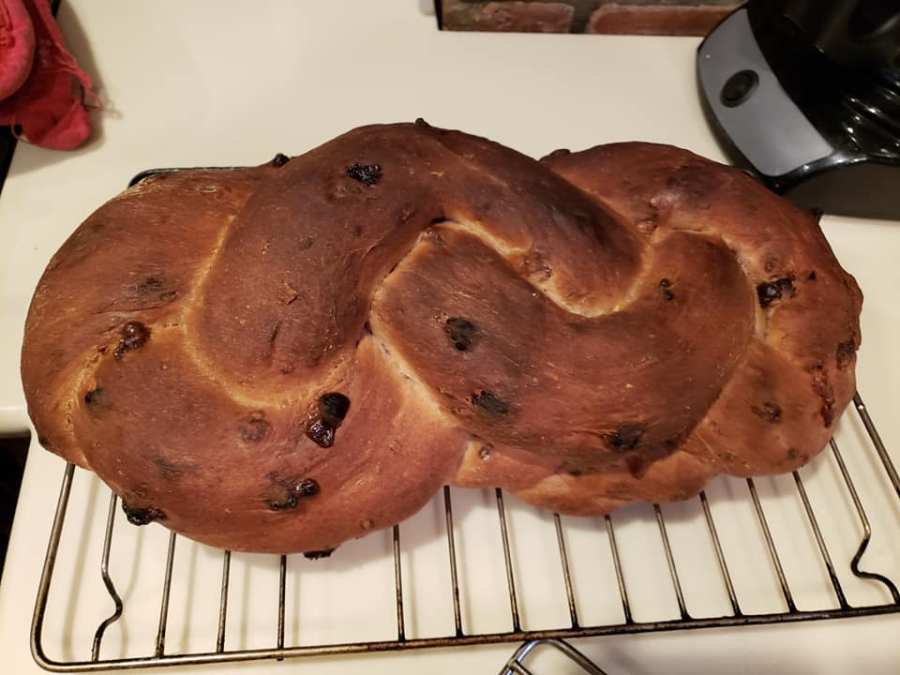 Many of you who know me in real life know that I have always enjoyed baking as much as, if not a bit more, than politics.  Thanks to my sister and future brother-in-law, I have developed a recent obsession with “The Great British Baking Show” on Netflix.  The show has not only inspired me to up my baking game, but to branch out from just desserts and into bread.   I bought Paul Hollywood’s “Bread” book and in the forward, Hollywood warns that bread baking is addicting.

Having grown comfortable after making three of Hollywood’s basic “bloomer” loaves over the past two weeks, I watched an episode of “Master Class” yesterday where he described how to make a “Chocolate Cherry Loaf.” I knew immediately I had to make it.

I copied the recipe down off the television and watched how Hollywood demonstrated the plaiting.  For those interested, the episode can be found here and the “official” recipe can be found here.  I recommend a kitchen scale vs. measuring cups for measuring your ingredients (my Oxo scale cost about $29 at Target and it is awesome). The recipe and method I used is below:

Add flour to bowl; add yeast to one side and salt to another and pour in oil.  Add about ¾ of the water and bring dough together.  I used my stand mixer with dough hook, but you can knead by hand as well.  Knead 5 to 7 minutes.

Drain cherries thoroughly.  Add cherries, white chocolate chips and dark chocolate chips to dough.  (I used a jar of Marco Polo pitted sour cherries which can be found in the UK aisle at Wegman’s).  Knead an additional 5 to 7 minutes.  The cherries will introduce more liquid into the dough; to counter this you will need to add 30 to 50 grams additional flour.

Tip dough out to floured surface and form into ball. Cover and allow to rise for 1 ½ hours.

Tip dough out onto floured surface and punch down.  Flatten into rectangle and cut in half.  Roll out into two ropes and plait into braid, tucking ends under.  Place on silicone or parchment lined baking tray and place inside roomy plastic bag.  Prove 1 ½ hours until dough springs back when pushed.  Heat oven to 430 degrees.

Bake bread for 20 minutes at 430; lower heat to 400 and bake an additional 20 to 25 minutes. Tap bread on bottom at the end of baking; bread is done when it sounds hollow.