I can’t think of a better metaphor for the shallowness of our political culture than the recent Golden Globes Awards show.  We’ll get back to the “President Oprah” moment in a bit, but first, let’s look at “Time’s Up,” which was launched by Hollywood Starlets dressing in black to “raise awareness” on an issue about which they were all already aware.  The irony of these starlets protesting their objectification by wearing the most revealing of outfits was apparently lost on most observers. But let’s hear those women roar, right?

If 2018 is finally going to be the often promised “Year of the Woman,” then let’s hope it evolves into something deeper than its flimsy window-dressing beginnings.

Nowhere is the shallowness of this movement more effectively illustrated than in my own township of Upper Providence, Montgomery County.  As one of the Republican candidates for Supervisor in my township, I knocked on thousands of doors.  I was getting very positive responses during my canvassing, until about two weeks before Election Day.  It was then that undecided women who answered the door started telling me that they “would love to vote for me,” but they couldn’t vote for a Republican.  They “had to send a message.”  These words were repeated verbatim at several stops, and then again on Election Day at the polls. 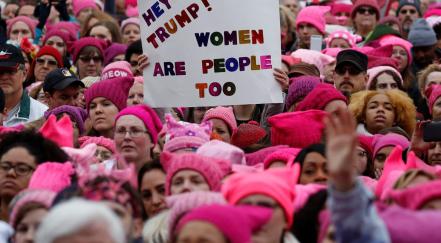 Presumably, that message was to Trump, who was not, to my knowledge, on the ballot in my township.

Nevertheless, they persisted.  The Democrats’ impressive Get Out The Vote apparatus was deployed with a vengeance in Upper Providence.  We watched as visibly angry women marched literally by the dozens to “send a message” to Trump and the patriarchal Republican Party by electing instead Democrats Laurie Higgins and Helen Calci, two politically unknown women, and John Pearson, a two-term Democrat retread. 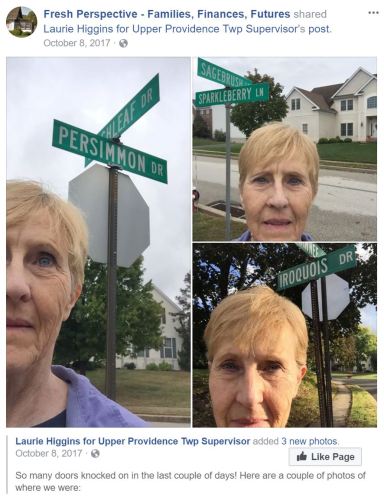 Well, maybe not.  The top vote getter was Laurie Higgins and she worked hard for it.  As her opponent, I can only respect the enthusiasm and long hours she put in to campaigning; she may even have knocked on more doors than I did.  Flying mostly solo, but sometimes accompanied by other local Democrat women, Higgins reported her daily door knocking efforts on Facebook while noting on several occasions that John Pearson was back at his place of business, a bar that they called their campaign headquarters, “holding down the fort.”  One would assume for her efforts, if not for her vote totals, that Laurie Higgins would have been elected Chairman of the Board, and if not that, at least Vice Chairman.  She certainly earned it.

So how to explain the fact that not only does Higgins hold no leadership position on the Board whatsoever, but that a vocal Trump-supporter and active participant in the Trump Campaign, Republican Al Vagnozzi, is Vice Chairman to John Pearson’s Chairman?  How to explain that Jim White, a Montgomery County Republican Committee member until literally just days before the election, an RNC delegate and one of the Trumpiest of Trump supporters in Upper Providence, gets the appointment to Chair the vacancy board?

The newly elected Democrats did the Montgomery County Republican Committee a further good turn in keeping the solicitors’ position with Dischell Bartle Dooley.

Is this the female empowerment “message” angry Democrat women wanted to send?  If so, I’m afraid it got a little muddled in the translation because from where I’m sitting, it looks like the patriarchy is still running the show.

You’ve been had, ladies.  And it’s not just Republicans who’ve been taking advantage of you.  Admittedly, my Township is the exception, which was a true bipartisan effort.  Typically, there is not this much of the political chess board exposed to the electorate. The tale of the vote totals shows only one Republican was supposed to make it across the finish line, keeping the Republican majority intact in Upper Providence, which probably would have happened but for the effectiveness of the Democrats GOTV efforts and the depth of Trump anger.  Because when the Democrats take over in Montgomery County, it’s usually simply to hand over the keys of power to a Democrat solicitor, like Sean Kilkenny or Jason Salus, two Democrats who are collecting control of Montgomery County Municipalities like kids collect Pokemon.

But if it ain’t broke, don’t fix it. Democrat-led movements such as Indivisible and EmergePA are looking to duplicate the overwhelming successes of 2017 and are now recruiting women to run for PA State Senate and Representative. It seems the only qualifications for candidacy are lady parts and the ability to hit as many feminist talking points as possible.  Katie Muth, a candidate for PA Senate District 44 announced her candidacy by telling her real “Life of Julia” story:  she proudly talks about how she is a “product of public resources” and about her personal need for easy access to abortion.  Sarah Campbell-Szymanski, a candidate for State Rep in PA 150, takes the feminist box checking to a new level:  not only does the blue-haired candidate talk about her “almost” abortion, but the married, unemployed mother-of-one has also decided to run as an openly bisexual candidate.  Mary Jo Daley, the current State Rep for PA 148, dyed a blue streak in her hair to show solidarity with Sarah. And remain relevant.

To be fair, I don’t think any of these political novices know what awaits them after election.  I am sure they are being given every encouragement by the Democrat party while it works to keep their women voters in a constant low state of Trump-induced agitation.

None of this is about putting women in power; it’s about capitalizing on a newly “woke” voting block so that the folks who are already wielding power can solidify or increase their hold thereof.  They are effectively manipulating women to do it. And they will continue to manipulate them as long as they can keep Democrat women angry and engaged enough to vote Democrat, but not so engaged as they take the time to look beyond the hashtag social media activism and an annual pink-pussy hat march.

Point being, we are not electing ideological leaders or change agents; that would change the balance of power and those in power promoting these candidates like the power structure just fine where it is, thank you very much.  This is about electing placeholders who will cede power to anointed party leaders, unelected appointees and backroom deal makers or face defeat in their next election.  It takes a little bit more than donning a pink hat and baring your soul on Twitter with your #metoo moment to be successful in politics.  But more importantly, it takes an electorate willing to invest time and effort to educating themselves beyond the flimsy window dressing to distinguish real leadership from malleable ingénues with a positive electability quotient. 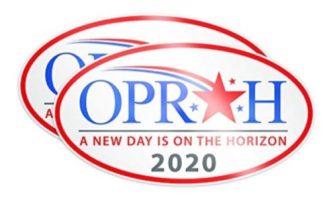 So a President Oprah is not all that farfetched.  As long as she wears black at the proper awards functions and speaks the right platitudes to the sisterhood, why not elect her?  It’s not like her lack of policy knowledge or experience really matter.  It’s not like her devotion to quack medicine or fad diets make her any more or less unqualified than anyone else.  She’s a woman.  She says the right things to women.  She has a following.  She can win.  She is the perfect candidate for this moment in time.  Why not elect her?

She’s not going to be running anything, anyway.

This post originally appeared on Gordon Glantz’s Blog, Ingordonville.com.  Many thanks to him for publishing.